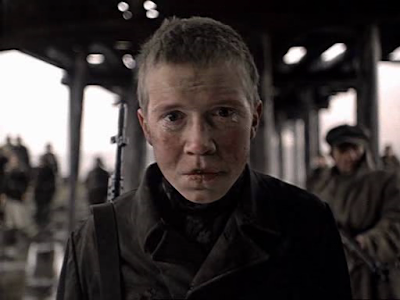 
Significance: Cited as one of the genre's finest, this acclaimed war film was featured in the latest Sight and Sound Poll (#154 in 2012 critics' poll and #30 in the directors' one). It also won two awards at the Moscow International Film Festival.


Thoughts: One of the most unsettling films I've ever seen. This is a rough watch, and the atrocities depicted are truly horrific, even if some of them aren't actually shown on-screen. It feels too realistic, which is a popular viewpoint. Aleksey Kravchenko gives an extraordinary performance, capturing the loss of childhood innocence amidst the brutality of war, and he was only fifteen at the time. The film also boasts superb cinematography, mostly shot with a Steadicam. Elem Klimov's masterful film might be hard to watch at times, but it's one that shouldn't be missed.


This is the tenth film in my 2013 Blind Spot Series, as first started by Ryan McNeil.
Posted by Josh at 9:57 PM