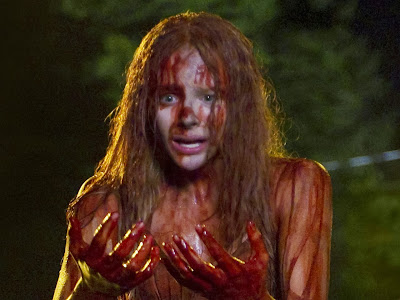 
Kimberly Peirce's version of Stephen King's novel steers in the direction of the 1976 revered classic, yet it does make an entertaining horror film. Carrie White (Moretz), a shy high schooler with telekinetic powers, has been raised by a fanatical religious mother (Moore). When she has her first period in the shower at school, the demeaning reaction of her classmates sets up a catastrophic chain of events, culminating in a prom night like no other. The story is well-known, and it unfolds in familiar pattern here.


Though reviews haven't been very positive, I actually liked this movie. Sure, it follows the original version quiet closely, which doesn't do it any favors, but the performances are very impressive. Chloë Grace Moretz gives a fine performance, delivering on the promise I saw in Let Me In three years ago. Rather than compare her work with Sissy Spacek's Oscar-nominated turn, I'll just state that Moretz's take on the character totally worked for me. The same goes for Julianne Moore's performance as Carrie's mother. Both actresses brought it. The cinematography is notable, as is the sound design, yet the film doesn't have much to offer, aside from these few strengths. Unfortunately, this will be compared to the original, which does almost exactly the same thing, only better.

Oscar Potential: None
Posted by Josh at 4:41 PM