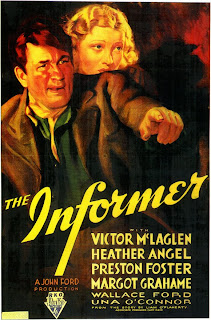 John Ford's drama takes place during Irish rebellion and follows Gypo Nolan (Victor McLaglen), a desperate ex-IRA member with no money left. In a moment of hasty decision making, he turns in his rebel friend for a 20 pound reward. He is forced to cover his guilt, but it proves too difficult to bear. As his money dwindles, his IRA friends are close to discovering the truth, and he must answer for what he has done. McLaglen's Oscar-winning performance is equal parts hammy and emotionally resonating, and the film's nod to German Expressionism gives it an appropriately ominous look. Released during the early stages of the Golden Age of Hollywood, it's not surprising that this film struck a chord with Oscar voters at the time.

Email ThisBlogThis!Share to TwitterShare to FacebookShare to Pinterest
Labels: 1939, Blind Spot Series, The Rules of the Game

Another Oscar season has come and gone, with the frontrunner Argo taking Best Picture. Though the ceremony had its ups and downs (and ran over), I think it went quite smoothly overall. But I don't foresee Seth MacFarlane as next year's host. At least he made Tommy Lee Jones laugh.

This year I've managed to see most Oscar-nominated films, except for 2 feature documentaries, 4 foreign language films, and the documentary short nominees. Since the ceremony is just hours away, I thought I'd share my rankings of each category (the films I haven't seen notwithstanding). These are my personal preferences, but my final predictions can be found here. 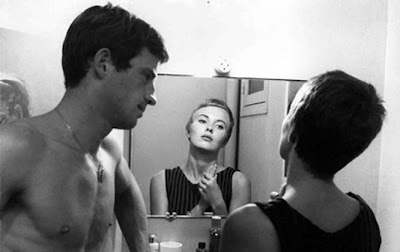 Oscar winner: The Apartment (Daniel Mandell)
Was this nominated?: No

Well, the time is finally here. Back in November, I predicted Argo would win 4 Oscars, including Best Picture. It's possible the film will accomplish that after all. Here are my final predictions. 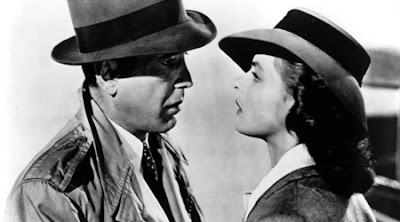 A few months ago, I revealed my picks for the top 10 Best Picture winners and the top 10 worst ones. But what about the films that fall in between? Check out where they land below. (If Argo manages to lose Sunday, I'll edit the list accordingly.)

Almost every year, the Academy presents one or more film contributors with Honorary Oscars, which means there are a number of artists who've received Oscars over the years without winning competitive ones. Here are 25 oversights the Academy righted.

For the past few years, I've predicted the Oscar nominations several months before the nominees are announced. I didn't publish these June 2012 predictions in a post, but, thankfully, I found them in my page drafts. So, here's how I did predicting the 85th Academy Award nominees (original predictions included) seven months ahead of time. 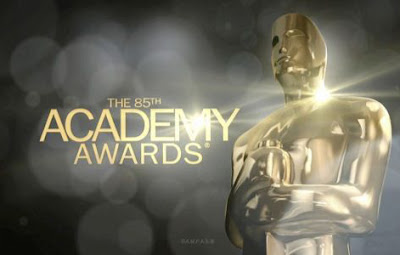 The 85th Oscar ceremony is only a week away. Here are some stats and reminders to keep in mind for the event next Sunday. 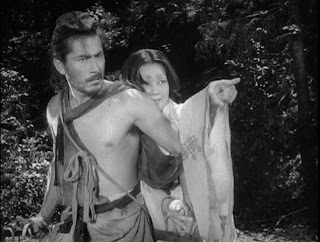 Oscar winner: King Solomon's Mines (Ralph E. Winters and Conrad A. Nervig)
Was this nominated?: No 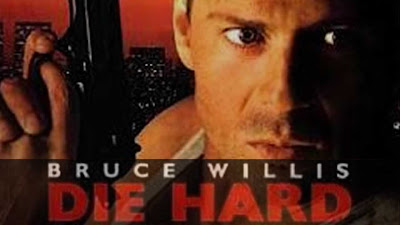 Since the fifth Die Hard film was released today, I thought it would be fitting to examine the series, which has been around for 25 years.

Email ThisBlogThis!Share to TwitterShare to FacebookShare to Pinterest
Labels: 2012, Liberal Arts, Reaction, The Imposter, The Paperboy 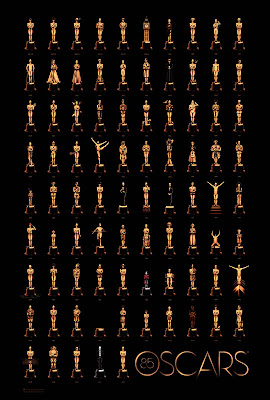 The Academy has released a collection of creative posters for its 84 Best Picture winners. You can view them at the Oscars site, but here are some of my favorites.

Email ThisBlogThis!Share to TwitterShare to FacebookShare to Pinterest
Labels: 2013, Review, Side Effects 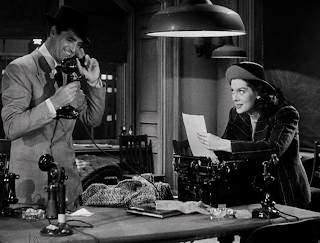 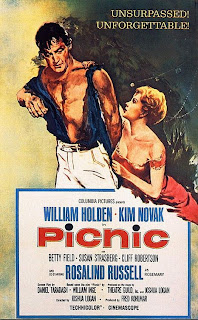 Based on the award-winning play by William Inge, director Joshua Logan's melodrama stars William Holden, Rosalind Russell, and Kim Novak in her breakout performance. Most of the film occurs over the course of one day in a small Kansas town, which is holding a Labor Day picnic. Visiting his old college friend Alan (Cliff Robertson), Hal Carter (Holden) arrives that morning and causes great unrest in some of the townspeople, among them Alan's girlfriend "Madge" Owens (Novak), her little sister Millie (Susan Strasberg), a local school teacher (Russell), and her boyfriend (Arthur O'Connell). The whole situation is complicated, but Carter leaves his mark on these citizens in a short period of time. Despite a promising premise, this misses the mark, as the characters are so unbalanced and the drama so overblown and forced that the edgy material feels too contrived and grating by today's standards. Though I can see why it received a Best Picture nomination, it's lost some of the impact it must've had in the 1950s.

The Evolution of the Top 10

I love lists. I love making lists, and I love discovering new films that force me to update those lists. It's interesting how one's favorites change over time, and I recently came across some of my old top 10 films of all time lists. Spanning over 3 years, here are five slowly evolving versions of my top 10.

The 85th Oscar nominations have yielded another odd stat.

Films I Saw in January 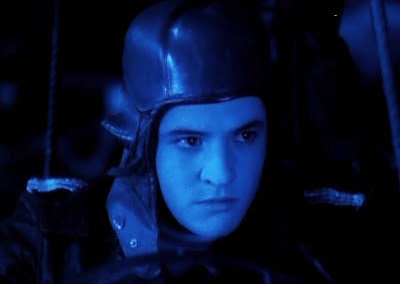