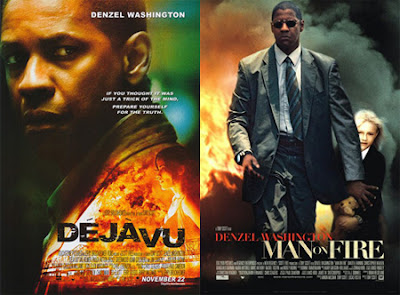 The setup.
In Man on Fire, an ex-assassin must avenge the death of the girl he was assigned to protect. In Deja Vu, an ATF agent must solve (and prevent) a terrorist bombing on a crowded ferry.
Winner: Deja Vu

The execution.
Both have all of the bells and whistles. Deja Vu has time-jumping and plenty of explosions. Man on Fire has payback and multiple deaths in the process of vengeance.
Winner: Deja Vu

The ending.
In Man on Fire, the hero dies to save the little girl, but they are both finally at peace. She's free to live, and he's free to let go. In Deja Vu, the present hero dies in the past, leaving his old self to deal with the cleanup of the averted disaster.
Winner: Man on Fire

The wild card.
Deja Vu has Jim Caviezel and Pam from "The Cosby Show". Man on Fire has Christopher Walken. 'Nuff said.
Winner: Man on Fire