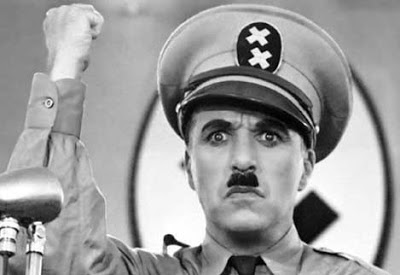 Significance: Often considered one of Chaplin's greatest, this film was featured in the latest Sight and Sound Poll (#144 in 2012 critics' poll and #174 in the directors' one). When it was originally released, this satire of Hitler received five Academy Award nominations, including Best Picture and Best Actor. It is now in the National Film Preservation Board's Film Registry.

Thoughts: Chaplin has most of a great film here. It's a funny political satire that, unfortunately, overstays its welcome. At 125 minutes, the film actually feels too long, with a rushed ending to complicate matters. Of course, Chaplin's screenplay provides many wonderful comic moments, including scenes with the barber's love interest (Goddard) and the dictator's ally (Oakie). The physical comedy works, and the performances are fine. Still, it feels a bit too indulgent, and the ending comes off a lazy one-off. More often than not, Chaplin made masterful films (see City Lights, Modern Times or The Kid), but this is a slight step down from those works. Overall, the film does work, and it is worthy of its essential status, especially for Chaplin fans.

This is the eighth film in my 2013 Blind Spot Series, as first started by Ryan McNeil.
Posted by Josh at 11:57 PM