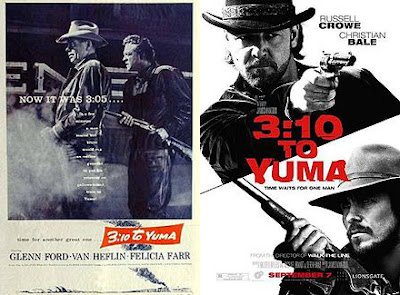 The original version vs. the remake. (SPOILERS)

In the original, a poor rancher named Dan Evans (Van Heflin) agrees to escort and deliver fugitive Ben Wade (Glenn Ford) to the train bound for his trial in Yuma. In the remake, the same story occurs (with Christian Bale playing Dan and Russell Crowe playing Ben), but it's fleshed out by an extra thirty minutes.
Winner: The remake

Both westerns have great shootouts, excellent leading performances, and an interesting relationship that develops between the two men. The original version is more bare, but it also features a quicker journey for Dan and Ben to take. In the remake, the men have a more troublesome journey and their relationship is, surprisingly, better developed.
Winner: The remake

In the original, both men escape on the train, and Dan and Ben ride to Yuma as friends. In the remake, Dan is killed, but avenged by Ben afterwards. Instead of running away, Ben chooses to get on the train anyway.
Winner: The remake 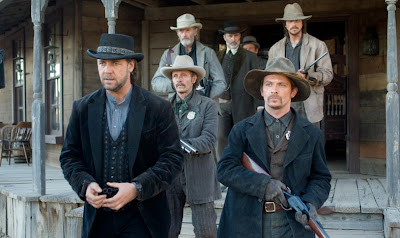 Winner: The remake beats the original 4-1

Email ThisBlogThis!Share to TwitterShare to FacebookShare to Pinterest
Labels: 1957, 2007, 3:10 to Yuma, Vs.