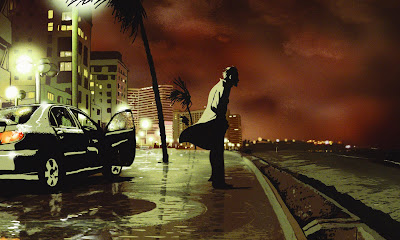 Plot Summary: Conducting a series of interviews, director Folman tries to recover lost memories of his war service in Lebanon.

Significance: The film is banned in Lebanon, and it is one of only two Israeli animated features (both released in 2008) to be released in theaters since 1962. Aside from widespread acclaim and its placement on multiple critics' top ten lists, it received many animation, documentary, and foreign film awards and nominations.

Thoughts: It's an interesting combination, given the juxtaposition of the stunning animation and the rough subject matter. Most of the scenes work very well with this style of animation, but the subjects look flat in others, which can be distracting. The film seems a bit unfocused at times, but the powerful ending is not to be forgotten. While some sequences feel unnecessary, the overall effect creates an intriguing, moving film. I'd recommend it for fans of world cinema, animation, or documentaries, as it's a combination of the three.

This is the fifth film in my 2013 Blind Spot Series, as first started by Ryan McNeil.
Posted by Josh at 12:51 AM