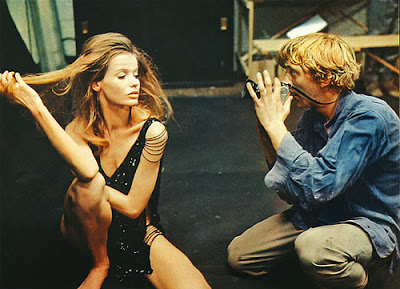 Plot Summary: A British photographer discovers a possible murder in an enlarged photo he took earlier that day.

Significance: Antonioni's acclaimed neorealist film was featured in the latest Sight and Sound Poll (#144 in 2012 critics' poll and #59 in the directors' one). It received two Academy Award nominations for Best Director and Best Original Screenplay, and it won the Palme d'Or at the Cannes Film Festival. Also, its release was influential in establishing the rating system that is still used by the MPAA.

Thoughts: This enigmatic art-house thriller is a great film, which is somewhat responsible for films like Coppola's The Conversation and De Palma's Blow Out. In his first big role, David Hemmings gives a solid performance, embodying the depraved photographer with ease. The film is well-crafted all around, with stunning achievements in production design, editing and cinematography. Antonioni's neorealist style might not be for everyone, but this is more accessible than his most famous film L'Avventura. If you haven't experienced one of his films, Blow-Up would be a great place to start.


This is the ninth film in my 2013 Blind Spot Series, as first started by Ryan McNeil.
Posted by Josh at 8:27 PM