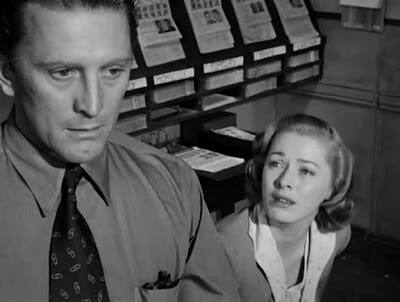 Significance: It's a classic film noir, which received critical acclaim upon its original release. The film won Best Actress at the Cannes Film Festival, and it was nominated for a BAFTA for Best Film and 4 Academy Awards, including Best Director, Best Actress, and Best Supporting Actress.

Thoughts: Wyler's adaptation of Kingsley's play is a great crime drama. Most of the film is set inside police headquarters, which creates a feeling of claustrophobia and adds to the tension. Douglas gives one of his best performances, which rivals his work in Ace in the Hole that year. Both characters are tough and learn harsh truths about themselves. Parker and Grant are also very good in their roles, as is the cast of detectives. The atmosphere depends on the cast, and everyone delivers solid work. For fans of cop movies or film noir, I highly recommend this film.

This is the seventh film in my 2013 Blind Spot Series, as first started by Ryan McNeil.
Posted by Josh at 9:22 PM