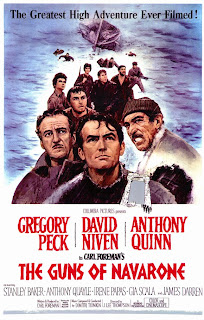 J. Lee Thompson's World War II action/adventure operates on a simple premise: a group of Allied solders is assembled and charged with destroying two massive guns on Navarone Island that are preventing the rescue of 2,000 troops trapped on a nearby island. Arguably a B movie, it features a lot of thrills, much like Von Ryan's Express (1965) and The Great Escape (1963). War films of this kind are always better with a solid cast, and this one doesn't disappoint. Gregory Peck played a strict military officer in Twelve O'Clock High (1949), and he's no less effective as Captain Mallory, the leader of the outfit. Playing his comrades, David Niven as Corporeal Miller and Anthony Quinn as Andrea Stavros are also great as the brains and the brawn. The film might not be the most dramatic war picture ever made, but it has it moments, both in style and in substance. It's no wonder the Academy nominated this enjoyable movie.

Trivia: Though featured in the title and heavily in the story, Navarone isn't actually a real place. 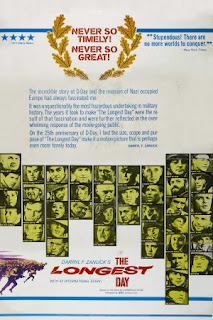 D-Day, June 6, 1944. It was a long day, and the film chronicles the events of it, showing the plight of the U.S, British, and German soldiers (each segment is handled by a different director). The film is bloated, but, overall, it stands as a thrilling war epic. However, it has its problems along the way. Not only is the film - and the day - long, but it also suffers from too many characters, whose cameos and/or introductions are still occurring after the first hour in this 3-hour affair. Akin to films like How the West Was Won (1963), it offers an incredible cast, yet it doesn't give many of them a chance to shine. The film has so many back-and-forth cuts between scenes that it's difficult to become engaged with these characters. Fortunately, it finally settles down in the last hour, providing a gripping climax to this long, intense day on the battlefield. With a production and an ensemble this big, it's easy to see why the film was recognized by the Academy.

Trivia: Roddy McDowall shot his small role as an American soldier during a delay on the Cleopatra (1963) shoot.
Posted by Josh at 3:23 PM