I Saw "Casablanca" on the Big Screen... 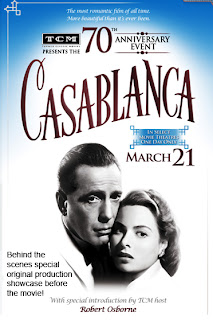 ...and it was amazing! Turner Classic Movies has re-released the film in theaters for one day only (today) in honor of its 70th anniversary. Not only is the restoration gorgeous, but the screening also features a brief documentary on the film, as well as an introduction by none other than Robert Osborne. I'm lucky I even got to see it, because I actually forgot all about it until I just happened to check the theater's showtimes. Anyway, the film is universally hailed as one of Hollywood's best offerings and should be seen in theaters if possible. Check it out if you can. You won't be disappointed. More details here.