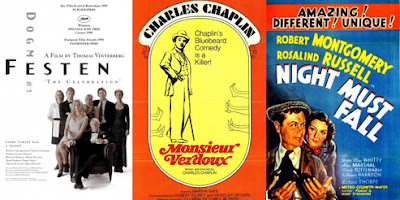 Ruth at FlixChatter asked if I could review these films, so here's a quick take on the three best films I saw for the first time last month. 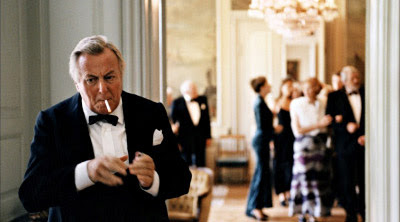 
A family reunion takes a strange turn when one of the children reveals something sinister about the father.

This film has a quiet intensity that builds as the narrative progresses. Filmed according to the strict Dogme 95 standards, this drama utilizes natural light and handheld cinematography to tackle this tough subject matter, which I won't spoil for anyone who hasn't seen it. In this case, it's best to be unprepared for the gravity of the situation. The performances are strong by the entire cast, especially Thomsen as the tormented son and Bo Larsen as his violent, ill-tempered brother. It's a wonderful family drama, which would be a great double feature with Susanne Bier's After the Wedding. 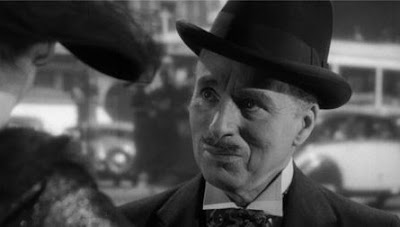 
A sophisticated gentleman makes his living by conning women, killing them and taking their money.

Chaplin's film has his usual lighthearted charm, and the filmmaker triumphs yet again in many areas both in front of and behind the camera. Seriously, this man was a genius: writing, directing, producing, scoring AND starring in his own films?! (No offense, Clint, but Charles was on another level.) The supporting cast of female performers are good, but Chaplin's elegant con artist is the star of the show. Though he had a hiccup or two, this is one of Chaplin's best works. It's a light piece of entertainment with the Chaplin brand. And that's a brand I love. 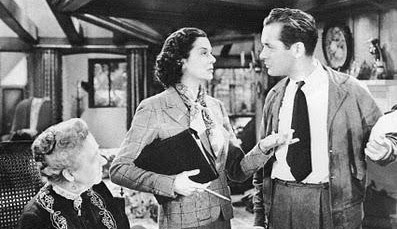 
A live-in companion becomes suspicious of her aunt's new handyman.

I've mentioned in another review about loving to be surprised by a film, and I'd add this to that list. Touted as a performance vehicle for Robert Montgomery, this is a first-rate thriller with great performances. Sure, Montgomery is electrifying as the suspected stranger, which makes the film all the more suspenseful, but Russell and Whitty give effective performances too. I love films with a wealth of dialogue, so this adapted version of Emlyn Williams' play was bound to make some impression on me. If you're a fan of George Cukor's Gaslight, this is a film you'd probably enjoy. I know I did.