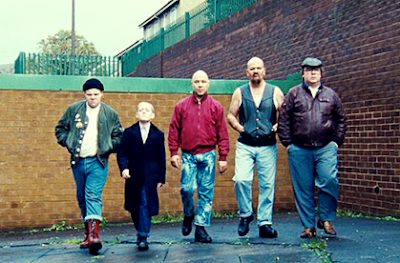 
Plot Summary: A young boy (Turgoose) joins a group of skinheads in 1983 England.

Significance: It's one of Great Britain's most praised films in recent memory, and it placed on several top ten lists that year. The film even made Time Out's 100 Best British Films list (at #88), and it won a BAFTA for Best British Film.

Thoughts: Meadows' work echoes that of Ken Loach, which is great for fans of the latter's films. He effectively combines gritty archive footage with new material that creates an intriguing final product. Aside from the brutal, tense environment that's palpable throughout the movie, it also boasts great performances from newcomer Thomas Turgoose and Stephen Graham, whose gripping supporting turn should have garnered more awards attention. If you want an intense dramatic film, look no further than this gem from the UK.

This is the sixth film in my 2013 Blind Spot Series, as first started by Ryan McNeil.
Posted by Josh at 11:55 PM

Email ThisBlogThis!Share to TwitterShare to FacebookShare to Pinterest
Labels: 2007, Blind Spot Series, This is England