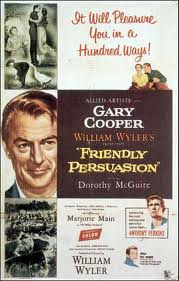 Gary Cooper and Dorothy Maguire headline this William Wyler-directed story of a Quaker family dealing with the onslaught of the Civil War in rural Indiana. The cast is wonderfully-suited for the material, and Wyler turns in yet another great (Best Picture-nominated) film. 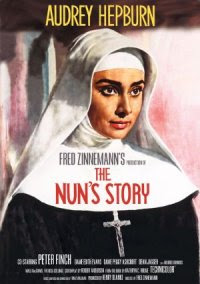 Interestingly, this 1959 period piece was directed by William Wyler's chief competitor: Fred Zinnemann. The film is a bloated spectale starring Audrey Hepburn as a woman who becomes a nun to work in medicine and struggles for years to become a good nun.

The film received nominations for Best Picture, Best Director, Best Actress, Best Adapted Screenplay, Best Cinematography, Best Film Editing, Best Score (Drama or Comedy), and Best Sound. Though the film is not one of the best Oscar movies, it does feature good performances from Hepburn and the wrongfully-snubbed Peter Finch.
Posted by Josh at 5:02 PM