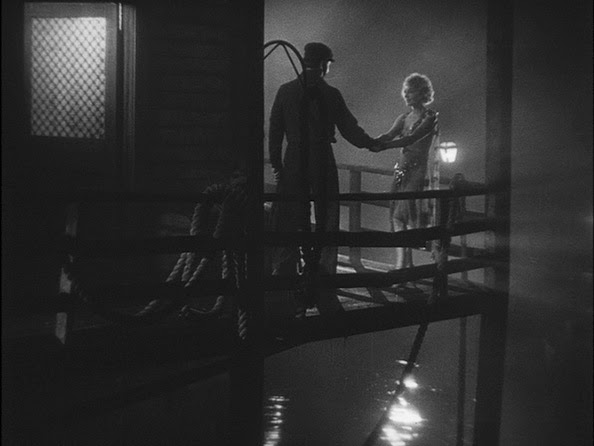 
Plot Summary: After his ship docks, a stoker (Bancroft) stops a woman (Compson) from committing suicide and subsequently marries her.


Significance: Though one of von Sternberg's lesser-known films, it was featured in the latest Sight and Sound Poll (#588 in the critics poll). It also won Best Foreign Language Film at the Kinema Junpo Awards, and it was added to the National Film Preservation Board's Film Registry in 1999.


Thoughts: Von Sternberg's early film is a downbeat romance, complete with the gloomy atmosphere of New York's docks as a backdrop. The heavy fog permeates the majority of the exterior scenes, and the bare sets provide a dreary, authentic setting. While the acting is serviceable, the simple love story is more interesting than almost everything else, apart from Harold Rosson's cinematography. Some of the shots are gorgeous, like the one above. Admittedly, this film isn't as good as The Blue Angel or Shanghai Express, but it's worth a look for classic movie fans.