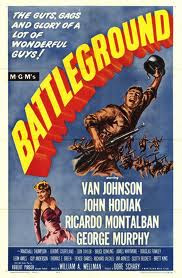 This World War II film, like many others, is loosely based on a true story. Trapped in the snow and surrounded by German troops, a squad from the 101st Airborne Division fought to hold their position until reinforcements arrived. The small unit dwindled, but the outfit had several strong characters, such as Holley (Johnson) and Kinnie (Whitmore), to get them through the rough spots. They refused to surrender to the Germans, and were bombarded for several days. A forgotten little war film, this features recognizable characters, yet the interesting story and a few of the performances make it a rousing piece of cinema from the 1940s. Technically speaking, the film also looks and sounds great, with snow-covered landscapes and battle noises being a major part of it. Is it a must-see? Probably not, but it's an enjoyable film nonetheless. It's easy to see why it was honored at the Academy Awards.

Trivia: A few of the cast members, such as James Whitmore, Douglas Fowley, and James Arness, served in WWII. 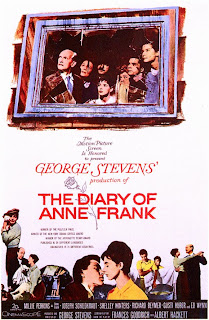 "In spite of everything I still believe people are really good at heart." Anne Frank wrote those words living in hiding, and the film covers the two-year period in which she did so. Enduring death, raids, and disappearances all around them, she, her family, and others spent most of their days in silence or in arguments, until they were taken by the Nazis towards the end of World War II. This is a tough film, given that the majority of viewers know what happened to Anne Frank, who is played with innocence and stubbornness by Millie Perkins. Despite its three-hour length, the performances by the entire cast (except maybe Richard Beymer) are genuinely heartfelt portrayals of these brave people, and they effectively sold me on the drama. It's an intense situation that is handled well by all involved, and it won many awards because of it.

Trivia: It's based on the Tony Award-winning play, which ran for 717 performances, and also won the Pulitzer Prize for Drama.
Posted by Josh at 7:31 PM