Since I haven't posted an entry into this series in months, I thought it was time to revive it. 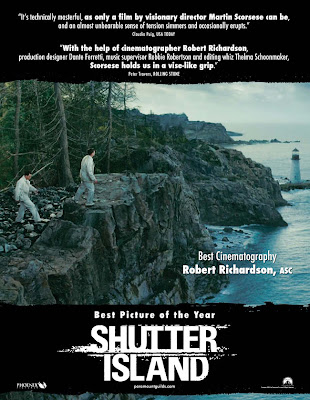 This 2010 psychological thriller from Oscar winner Martin Scorsese had technical prowess and a fantastic performance from Leonardo DiCaprio, a three-time Academy Award nominee. It was a stylish throwback to classic movies, and it seemed to be ripe for Oscar notice. But it was supposed to be released in the fall of 2009. Instead, it was moved to a February 2010 theatrical release. Though it would become Scorsese's highest grossing film in the U.S., critics could not reach a consensus, and the film was relatively forgotten when awards season came.

Did it deserve to be nominated? Yes, at least for Best Actor, Best Art Direction, and Best Cinematography.
Posted by Josh at 7:26 PM